Effects seen after the electricity is shut off can last for an hour or so and seem to arise from a second mechanism. Pharmacological evidence suggests that the current increases the expression of proteins called NMDA receptors at the synapses, the connections between neurons. This heightens the plasticity of brain tissue — leaving it in a temporary state somewhat like wet clay, in which it is more apt to reshape its synaptic connections in response to stimuli, such as when learning a video game. 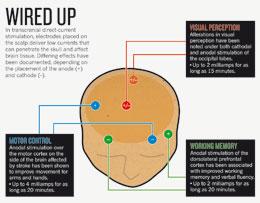 Researchers are exploring the ways in which this wet-clay state can be exploited. In a 2009 study6, Leonardo Cohen at the National Institute of Neurological Disorders and Stroke in Bethesda, Maryland, showed that tDCS improved people’s ability to learn a simple coordination exercise — and that the improvement was still apparent three months after the experiment ended. Such results have led to an interest in stroke rehabilitation strategies. Small trials by Cohen, Nitsche, and others have shown improved recovery of hand function when tDCS is used this way.