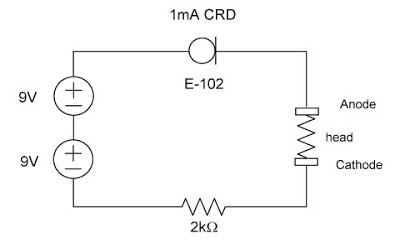 Above is a schematic for a simple tDCS circuit that will supply 1mA. The CRD (E-102) maintains a 1mA regulated current to the head (between the Anode and Cathode). The E-102 can be purchased at www.mouser.com. Two 9V batteries are better than one, particularly if you have a less than perfect electrode-head interface, and it will last much longer without the need to change the battery; also the CRD has a 1V-2V drop so the full battery voltage is not present at the Anode. In using the CRD, you have a two pin regulator instead of a three pin regulator and a resistor for the LM334, which means simpler construction.