Ted pointed this out to me in a comment. We’ve met both Alan Snyder and Michael Weisend elsewhere on the blog. This video sums up nicely the areas they’re working in. Anyone else alarmed at the thought of there being a pressing need to fill drone pilot seats and that perhaps tDCS could cut training time in half?

Obviously we don’t have access to fMRI, yet. But the method Wesiend is demonstrating in the video certainly seems the way to go: Isolate the area of the brain used in the desired skill, and then apply tDCS to facilitate learning.

This is definitely a pattern-recognition type of experiment.

…When you are a novice, there’s low-level activation in the medial temporal lobes. But in experts, there’s very high-level activation. And so we targeted tDCS at these areas that increase activity in order to accelerate training. (This is context of drone pilot training)

I need help identifying and understanding this electrode setup. Note that it’s the same electrode being used in this shot from a Scientific America article discussing the same research. If there was an electrode in the middle of the cluster, that might be the Anode and the surrounding electrodes could be Cathodes (as seems to be what is developing around HD-tDCS). But a symmetrical 5 node electrode cluster is confusing me.

I was trying to understand why Soterix (Marom Bikson) would be developing devices that could administer 8 channels of tDCS simultaneously. Putting the pieces of these articles, papers, and videos together, it becomes pretty clear that tDCS, used to enhance training, especially in military (DOD) contexts, could be hugely profitable.

Anodal 2.0 mA tDCS performed for 30 min over these regions in a series of single-blind, randomized studies resulted in significant improvements in learning and performance compared with 0.1 mA tDCS. This difference in performance increased to a factor of two after a one-hour delay. A dose-response effect of current strength on learning was also found.

Through the Wormhole S03E08 Part 3 of 3 ENSubs – YouTube
http://www.youtube.com/watch?v=I13IOKfeLzw&feature=youtu.be [more]

Alan Snyder is the Australian Dr. often associated with tDCS, TMS and creativity. We met him earlier on the blog. Dr. Snyder seems to be that rare combination of scientist, marketer and cheerleader for change. Turns out you can try his ‘Savant Test‘ as shown in this Nat Geo clip. 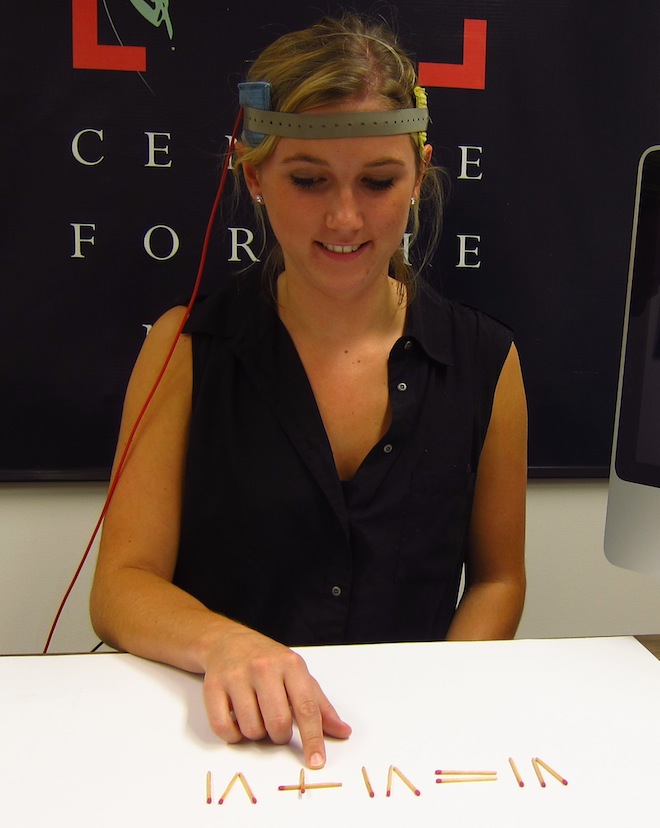