Analysing these high-standard studies revealed that tDCS seems to reliably improve the symptoms of depression, addiction and craving, and fibromyalgia. It also uncovered that the technique does not work for tinnitus, and that the evidence for using tDCS for stroke rehabilitation was not as strong as many had thought.

Just kidding. C’mon folks. The smallest bit of Googling… At least he doesn’t seem to have hurt himself.

Based on his perception of the Sally Adee article/study featured on RadioLab 9-Volt Nirvana episode, YouTuber TheCharmIsGlobal attempted to replicate the experience in an experiment he called, “TDCS EXPERIMENT WITH CALL OF DUTY: BLACK OPS III” The 43 minute video is mostly onscreen playing of Call Of Duty, but he starts the video with a discussion of tDCS, applies tDCS as shown above at around 10:40, and declares victory at 42:50.

So the verdict is in, yeah, it does work! It really does work!

My sense is that the author’s experience is very similar to that of most tDCS DIYers – an initial flurry of interest followed by frustration at not knowing if ‘it’s working’. That’s why it’s exciting to see easily replicated protocols for self-testing emerging around the Dual N-Back game that is available for free. http://brainworkshop.sourceforge.net/download.html

A device mentioned in the article is J.D. Leadam’s ‘Brain Stimulator’ http://thebrainstimulator.net (No affiliation)

We’d decided to try the “accelerated learning” montage that had been developed and tested by DARPA. The best test of the device we could come up with was to play Nintendo Wii Mario Kart while brain zapping for 20 minutes — our performance seemed easily measurable (we would just play the same course, over and over) and a lot less violent. At first I was miserable, my green dinosaur avatar, Yoshi, falling off the track on every hairpin turn and barely finishing the course in 3:30. By the end, though, I was cracking 3:00. Of course, there was no control here, no way to tell whether I was simply learning a new skill, but I was cautiously optimistic.

In the weeks that followed, I stuck to it, undertaking 20 minutes of tDCS four to five days a week. I decided to try to teach myself interactive web design, and whenever I’d run the current through my brain, I’d accompany it with 20 minutes on Code Academy, the teach-yourself-to-code megasite. But after a few weeks, the results I was looking for seemed elusive. I was obviously getting better at coding, but there was no way for me to know what role the electricity was playing. And it was still kind of painful. So I quit, and about two months after visiting Bikson’s lab, my tDCS device is gathering dust on a shelf in my office.

via I want to be your neuroscience experiment | Al Jazeera America.

Sally Adee, who tried tDCS as part of an article she reported at The New Scientist, was featured on Radiolab’s episode and later wrote a personal essay about the treatment. The shocks made her feel “like I had just had an excellent cup of coffee, but without the caffeine jitters. I felt clear-headed and like myself, just sharper. Calmer. Without fear and without doubt.”
That clarity was emotionally profound: For days after the treatment, her mind was free of the nagging voices of self-doubt and fear that she realized she lived with daily.
Talking with Mr. Abumrad on his show, she said: “I was this person I hadn’t experienced before, and I thought maybe this is the actual core person who I am when all my baggage isn’t weighing on me. It was like somebody had wiped a really steamy window and I was able to look at the world for what it was.”

via This Procedure May Improve Your Brain — and Uncover the Real You – NYTimes.com.

In the last couple years, tDCS has been all over the news. Researchers claim that juicing the brain with just 2 milliamps (think 9-volt battery) can help with everything from learning languages, to quitting smoking, to overcoming depression. We bring Michael Weisend, neuroscientist at Wright State Research Institute, into the studio to tell us how it works (Bonus: you get to hear Jad get his brain zapped). Peter Reiner and Nick Fitz of the University of British Columbia help us think through the consequences of a world where anyone with 20 dollars and access to Radioshack can make their own brain zapper. And finally, Sally tells us about the unexpected after-effects of a day of super-charged sniper training and makes us wonder about world where you can order up a state of mind. 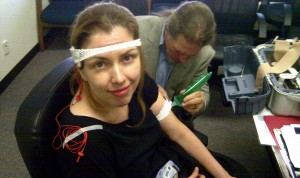 The 20 minutes I spent hitting targets while electricity coursed through my brain were far from transcendent. I only remember feeling like I had just had an excellent cup of coffee, but without the caffeine jitters. I felt clear-headed and like myself, just sharper. Calmer. Without fear and without doubt. From there on, I just spent the time waiting for a problem to appear so that I could solve it.

It was only when they turned off the current that I grasped what had just happened. Relieved of the minefield of self-doubt that constitutes my basic personality, I was a hell of a shot. And I can’t tell you how stunning it was to suddenly understand just how much of a drag that inner cacophony is on my ability to navigate life and basic tasks.

via Better Living Through Electrochemistry : The Last Word On Nothing.

That is why I’m now allowing Michael Weisend, who works at the Mind Research Network in Albuquerque, New Mexico, to hook my brain up to what’s essentially a 9-volt battery. He sticks the anode – the positive pole of the battery – to my temple, and the cathode to my left arm. “You’re going to feel a slight tingle,” he says, and warns me that if I remove an electrode and break the connection, the voltage passing through my brain will blind me for a good few seconds.

Weisend, who is working on a US Defense Advanced Research Projects Agency programme to accelerate learning, has been using this form of transcranial direct current stimulation (tDCS) to cut the time it takes to train snipers. From the electrodes, a 2-milliamp current will run through the part of my brain associated with object recognition – an important skill when visually combing a scene for assailants.