Dr. Alexander Thiel, director of the Comprehensive Stroke Centre at Montreal’s Jewish General Hospital, said the TDCS treatments have been studied before, but what’s special about the study out of Oxford is that it suggests the treatment may be causing structural changes in the brain that contribute to the patient’s recovery.

“This is important because it could either indicate that some parts of these nerve cells are able to regenerate, or these nerve cells try to form alternative pathways  to reroute the traffic in the brain to a different route  from the one that has been destroyed by the stroke,” he told CTV News.

Stroke patients in Canada can’t get TDCS therapy outside of a research study. But with several studies underway around the world, scientists hope they’ll be able to quickly confirm that brain stimulation has the power to accelerate stroke recovery.

The final thing I wanted to test was electric shocks. Is it safe to shock your brain? For some years scientists have been using tDCS (transcranial direct current stimulation, a small electrical charge to the skull) to try to improve a whole range of things, from learning to reaction times. 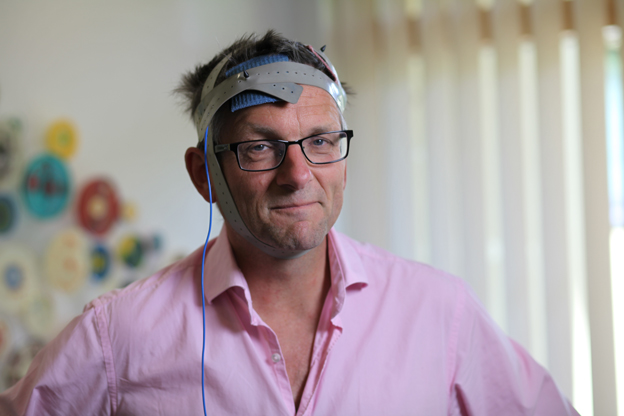 Dr Charlotte Stagg of Oxford University, has been using it to help people recover strength in their hands after a stroke. Charlotte has found that, compared with a sham treatment, tDCS seems to speed up recovery, probably because of the effect that tiny electric currents have on neuronal connections inside the brain.

To see what effect it would have on me, Dr Stagg carefully positioned some electrodes on my skull and turned on the machine.

There was a slight itchiness and it did feel as if my brain had been given a jolt, but had it actually made any difference?

The short answer is yes. In a test which involved pressing a button when I saw a light go on, my reaction times improved from an average of 650 milliseconds before the machine was turned on, to 550 milliseconds with it on. These findings are in line with results from other subjects.

via BBC News – Unexpected ways to wake up your brain.