tDCS modified moral behavior! By ‘utilitarian’ I believe the researchers mean that the subject was less likely to ‘save the many’ by (actively participating in) sacrificing the few.

Accordingly, during anodal stimulation of the left DLPFC participants rated the utilitarian actions as more inappropriate than they did during sham and cathodal stimulation. Thus, anodal tDCS of the left DLPFC resulted in a shift of preference from an utilitarian, active decisions (i.e. to actively hazard another person’s life to rescue the lives of several people) to non-utilitarian, passive decisions (i.e. to avoid harming another person, but in consequence to accept the harm to several people.

For context, you might want to examine The Trolley Problem!

CC stands for cognitive control. In this study 28 participants took a PASAT test (try one yourself online the better you do the harder it gets). They also reported their state of mind, (PANAS) both before and after the PASAT test. Participants who received tDCS to dlPFC (dorsalateral prefrontal cortext) showed increased cognitive control and less stress from the test itself.

With this study, we provide first evidence that the enhancement of activity in the left prefrontal cortex by anodal tDCS during an adaptively challenging attention task improves performance parallel to, and in correlation with the suppression of specific task-induced negative affect. These data can be interpreted as a tDCS-supported shift of processing resources towards task-oriented performance away from preoccupation with task-related negative affect and cognition. Thereby they extend the notion of enhanced CC by prefrontal activation to internally generated distress-related distractors. More specifically, by demonstrating that tDCS-induced higher performance is associated with a lesser degree of feeling ‘upset’ with the task, these data may exemplify a subjective, experiential aspect of enhanced CC in challenging operations. Not least, these findings substantially support the concept of a tDCS-enhanced CC training as a new pathophysiology-based treatment approach of disorders associated with dysfunctional CC

tDCS seems to be (they say ‘might’), allowing our focus network to overpower the feedback network thereby shutting out the negative feedback (those self-doubting voices).

Since processing in the brain is highly competitive with different pathways mediating different aspects of information, the winners are those with the strongest sources of support [11]. Accordingly, increased activation of the dlPFC by anodal tDCS might strengthen its function to avert attention from affective reactions induced by performance errors and thus maintain goal-directed processing.

via PLOS ONE: Keep Calm and Carry On: Improved Frustration Tolerance and Processing Speed by Transcranial Direct Current Stimulation (tDCS).

Even though measuring from cranial landmarks is one way to find these points, I always question measuring on the head, or body, because of the size differences between people. Hence to make it easier to locate the points, below are numerous pictures.

Left Anode Dorsolateral Prefrontal Cortex (DLPFC)
The left is obviously the left side of the head, and the anode is the more positive of the two leads (green wire on the Cognitive kit); current goes from electronics to anode through the head to cathode back to the electronics. For the position of the DLPFC, check out the cranium below: 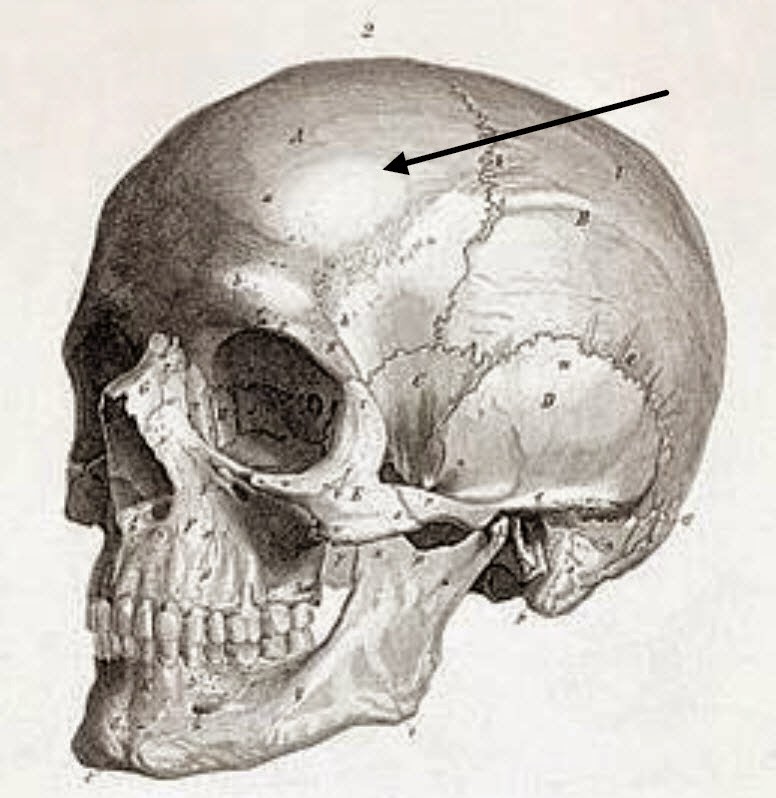 And on me pointing and with a sponge electrode(see there is an advantage to having little hair, better tDCS montage location and better electrode connection). 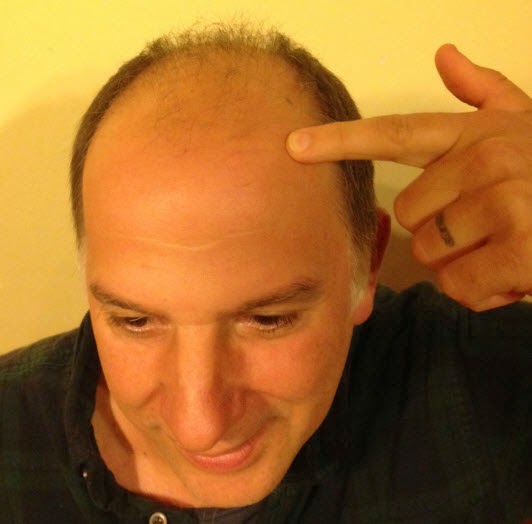 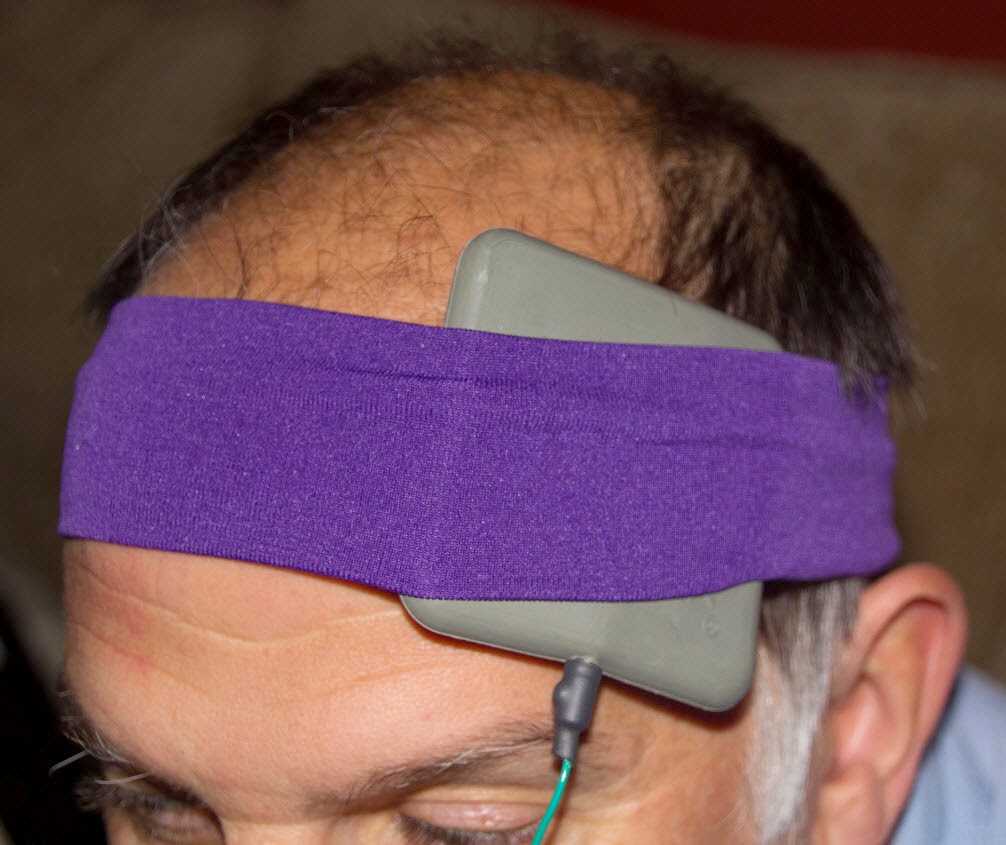 A lot of the ‘pop sci’ articles are drawing on the results of only a few studies. Hopefully we’ll get affirmation of the efficacy of tDCS in cognitive enhancement soon.

Does Passing A Small Current Through Your Brain Really Make You Smarter?

Excellent update from Giulio Ruffini of Neuroelectrics. Full of links to relevant papers.

As far as I can tell, this is a new development in understanding the mechanism for the mediation of pain using tDCS.

Immediate effects of tDCS on the μ-opioid system of a chronic pain patient
To our knowledge, we provide data for the first time in vivo that there is possibly an instant increase of endogenous μ-opioid release during acute motor cortex neuromodulation with tDCS.
(And the pop-sci media follow-up Electrical Current Can Unlock The Seriously Good Drugs In Your Brain and Happiness Is a Warm Transcranial Direct Current Electrode)

A lot of research is going on right now into understanding where exactly, current if flowing.

The electric field in the cortex during transcranial current stimulation
The aim of this study was to investigate the effect of tissue heterogeneity and of the complex cortical geometry on the electric field distribution.

A pioneer work on electric brain stimulation in psychotic patients. Rudolph Gottfried Arndt and his 1870s studies.
Today’s brain stimulation methods are commonly traced back historically to surgical brain operations. With this one-sided historical approach it is easy to overlook the fact that non-surgical electrical brain-stimulating applications preceded present-day therapies.

Mental Practice, or MP is practicing doing something without actually doing it. A musician imagining playing their instrument for instance. This study measured quality of handwriting with the non-dominant hand while using tDCS.

Site-specific effects of mental practice combined with transcranial direct current stimulation on motor learning
In conclusion, our results suggest that MP-induced effects in improving motor performance can be successfully consolidated by excitatory non-invasive brain stimulation on the M1 and left DLPFC.

Working memory, as associated with ‘brain training’ and ‘plasticity‘, is often expressed as what one would wish to have more of, or at the very least, what one hopes not to lose as we age. (For a great overview of working memory and the how’s of enhancing it, see this fascinating post from neuroscientist Bradley Voytek’s blog  Working memory and cognitive enhancement.)

This 2011 paper does confirm positive results of tDCS in a similar application and test setup. Improving working memory: exploring the effect of transcranial random noise stimulation and transcranial direct current stimulation on the dorsolateral prefrontal cortex.

However, the study does provide confirmation of previous findings that anodal tDCS enhances some aspects of DLPFC functioning.